🎆🐅Wherever you are and whatever you are doing during the festivities, we want to wish you many blessings and a very happy Lunar New Year! 🎊 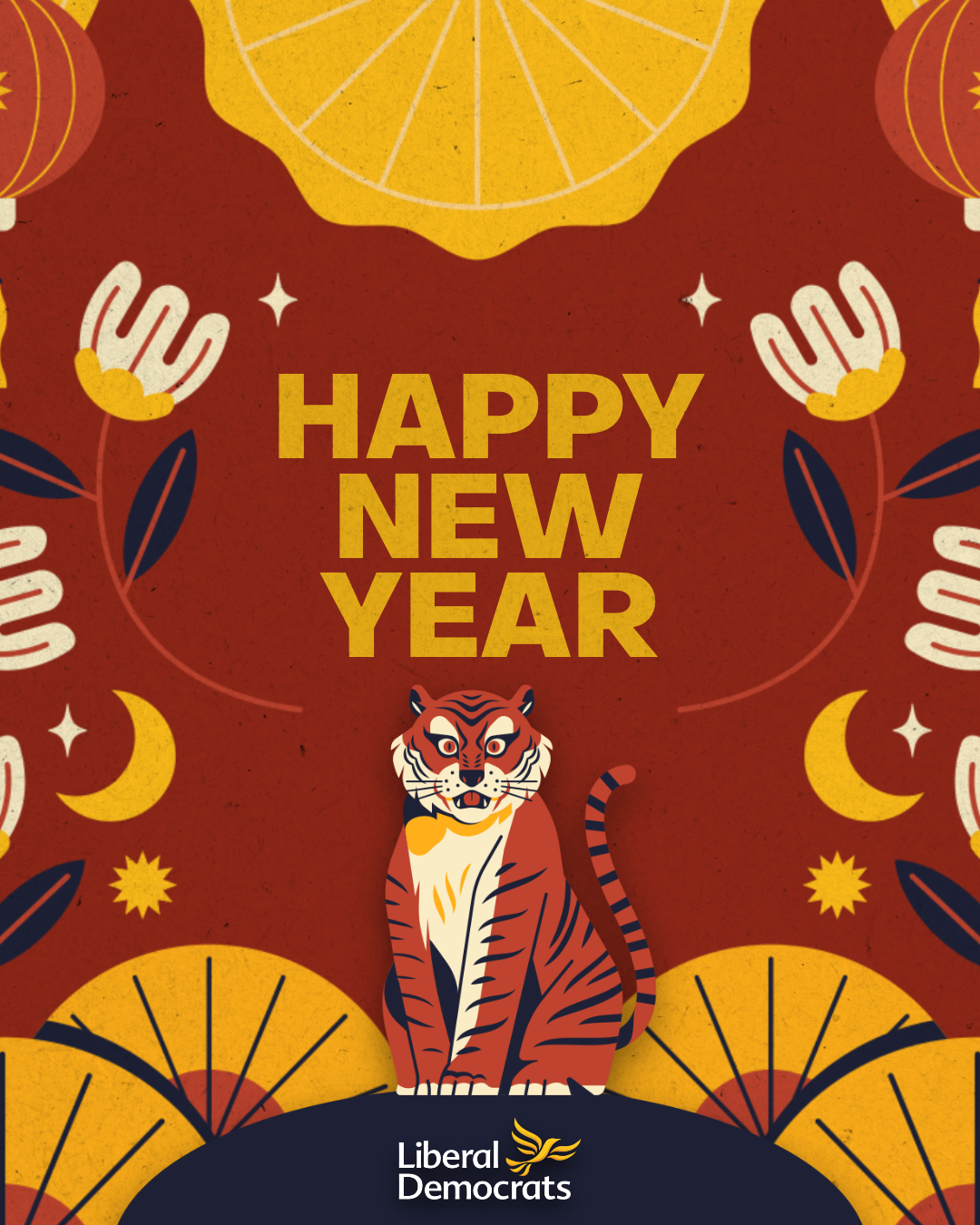 How Long is Lunar New Year?

Celebrations last up to 16 days, but only the first 7 days are considered a public holiday (January 31st–February 6th, 2022).

Did you know that 20% of us worldwide celebrate Lunar New Year?

An open session with contributions from key members to share about CLD's work such as:

- How to become a candidate

- Debate the current climate of fear and xenophobia following the breaking of the so-called Chinese spy story.

- Contributions and feedback in smaller break out rooms are welcome afterwards.

The terms 'Chinese New Year' and 'Lunar New Year' are often used synonymously, and in the right context (of China), usually refer to the same thing.

There is, however, a distinction between the two terms, and there are two important things to keep in mind.

"Chinese New Year" and "Lunar New Year" can have:

b) different names... when Lunar New Year isn't called Chinese New Year (e.g. in Vietnam) even when it's on the same date.

In China, you’ll hear it being called Chunjie (春节), or the Spring Festival. It’s still very wintry, but the holiday marks the end of the coldest days. People welcome spring and what it brings along: planting and harvests, new beginnings and fresh starts.

Should You Call It "Chinese New Year" or "Lunar New Year"?

As there are so many terms and labels for common celebrations around the world, there are bound to be just as many disagreements and misconceptions regarding them.

Either way, whether you refer to it as the Chinese New Year, Lunar New Year, Spring Festival, or any other name, in the end it is the context that matters, and as long as no intentional offense is meant, it is safe to say that almost everyone will just be happy to share and celebrate the festive occasion all around the world, whatever it's called!

Our friends, The Chinese Liberal Democrats (CLD) refer to it as the Lunar New Year, so we have also chosen to do the same!

1. The Most Fireworks Are Set Off In The World That Night 🎇

Similar to the Korean Chuseok holiday or the Mexican Day of the Dead traditions, the belief is held that the offerings will bring fortune and good luck to ancestors in the afterlife.

Firecrackers are supposed to scare off monsters and bad luck, so folks stay up on Lunar New Year’s Eve and set off firecrackers at midnight.

In the morning, it's repeated again to welcome the new year and good luck. At night, fake paper money is burnt and gold bars printed in honor of deceased loved ones.

Beijing banned fireworks for 13 years however this was lifted in 2006 following public outcry.

Due to safety concerns and the life-threatening results of increasing air pollution, many Chinese cities have banned fireworks with more than 500 cities with restrictions in place.

But many people do it anyway.

If you’re in China during this time, you’ll probably be able to hear and see the explosions for at least 3 nights (it's been known to go on for weeks!).

3. The Spring Festival Causes The Largest Human Migration in the World 🚇

The most important part of Lunar New Year is the reunification of the family, at home, in time for the New Year’s Eve dinner.

Today, most elderly parents live in rural villages as most descendants work in the cities, causing the largest human migration known to man.

A typical day travelling on the subway to work means busy stations with people just barely squishing past the door.

Now try and imagine the intensity of Chunyun. Purchasing train tickets often leads to a mad rush, with the earliest you can buy tickets 60 days before.

4. Lunar New Year is a festival rich in traditions and customs

According to tradition, for 16 days from New Year's Eve to the Lantern Festival, preparations start as early as a month beforehand. Some examples include:-

- Sweeping the home to rid of any misfortune and bad luck.

- Giving red envelopes (hongbao in Mandarin, lai see in Cantonese, or lìxì in Vietnamese) to children and anyone who's unmarried as a way to send good wishes.

- Setting off fireworks and firecrackers to ward off Nian. According to Chinese mythology, a 'Nian' is a beast that lives under the sea or in the mountains.

- Performances of dragon dances and lion dances. Lookout for tiger dances this time round!

The food eaten around Lunar New Year are symbolic such as the Yule Log cake. Many have special meanings behind them with puns in the name.

An example is the popular tangyuan(汤原) for example. It literally means “soup balls.” But it sounds like tuanyuan (团圆), which means reunion.

Nian gao (年糕) is a type of rice cake. It symbolizes success each and every year.

Fa gao (发糕) is a the hybrid of sponge cakes and muffins. People dye it festive colors. The fa is the same as in fa cai (发财), which means “to get rich.”

5. Every year has a zodiac animal

There are 12 Chinese zodiacs just as there are 12 zodiacs in Western culture, one for each month.

A key difference is that the animal is for the entire year. 2022 is the Year of the Tiger.

Some of the animals (such as Rat, Snake, Dog and Pig) aren’t perceived by most as likeable, however as a zodiac, their positive traits are bestowed on people born that year.

Your zodiac animal can decide your career, health and relationship success.

Make sure you find out what zodiac animal you are!